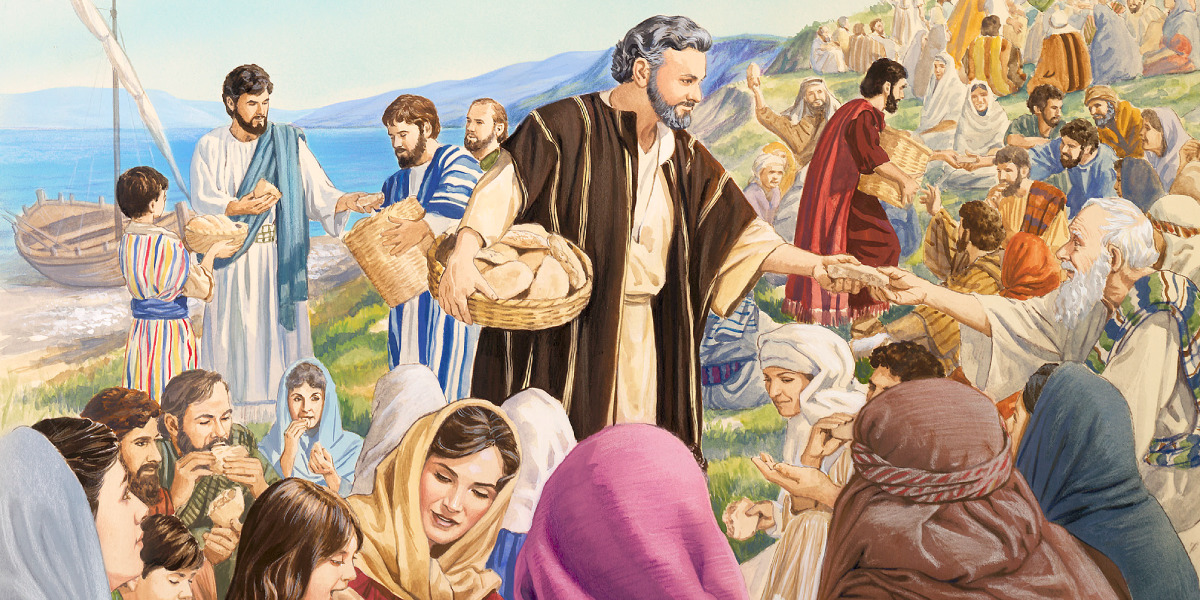 He asked them, “How many loaves do you have?” And they said, “Seven.”

The two are related.

Just after the feeding of the 4,000, which came shortly after the feeding of the 5,000, the Pharisees asked Jesus for a sign. He sighed. Given what we meditated on last meditation, we can see why. Everything Jesus did was a complete fulfillment of an obvious, strong theme in the Old Testament. The Lord provides bread from heaven; Jesus provides bread from heaven. Who could possibly miss that sign? So Jesus in essence says, “Enough, no more signs.”

Then this passage comes up: “Now the disciples had forgotten to take bread, and they did not have more than one loaf with them in the boat. Then He charged them, saying, “Take heed, beware of the leaven of the Pharisees and the leaven of Herod.”

The disciples, obviously forgetting what Jesus had just done – twice! – wonder if Jesus was upset that they had no bread, as if this were a problem with One who just fed upwards of 20,000 people with twelve loaves of bread. When Jesus reminds them of this, the Gospel of Matthew tells us (but not Mark), they realize He’s talking about the doctrine of the Pharisees. (Another interesting divergence between Matthew and Mark, is in Matthew, Jesus talks about the leaven of the Pharisees and Sadducees; in Mark, the Pharisees and Herod. The Sadducees were indeed the more political religious party, who would have been in cahoots with Herod’s people.)

A few other hints. In Luke Jesus says the leaven of the Pharisees is hypocrisy, and then says, “For there is nothing covered that will not be revealed, nor hidden that will not be known.” This reminds us of Jesus’ parable of the leaven, in which He says, “The kingdom of heaven is like leaven, which a woman took and hid in three measures of meal till it was all leavened.” Leaven is hidden, but then exposes itself by its results, which is expanded bread.

Let’s play with the image for a bit and see where it goes. St. Paul brings up leaven always negatively, twice when he talks about how a little bad doctrine can ruin the whole body. One time is moral, when he warns about the Corinthians tolerating sexual immorality; the second is doctrinal, when he warns the Galatians about tolerating those who insisted on circumcision.

He uses an interesting image with the Corinthians. He says they are “puffed up” and glorifying in their tolerance of sexual immorality. Well, “puffed up” works nicely with the leaven image, right?

Coupled with the connection between the Pharisee’s leaven and hypocrisy, we can see how the Pharisee’s got “puffed up” with airy nothingness in their teaching of the Law – a lot of blind-leading-blind fluff that sounded nice, but in the end produced nothing. A bun is just a Saltine cracker with yeast, but though it appears larger and more filling, in fact it is not.

So, if we run with this imagine, Jesus might be saying, “Beware of the leaven of the Pharisees,” meaning, “The teaching of the Pharisees is like leaven, all puffy fluffiness without really adding anything to it.” By contrast, Jesus actually added to the dough. He didn’t just do a parlor trick with yeast and cause existent bread to expand a bit more. He created.

Can we surmise from this that the bread Jesus used was unleavened, just as He used at the Last Supper? We can’t know for sure.

But then there’s the parable, where Jesus talks of leaven positively, unlike St. Paul. It’s hidden in the meal but then later its exposed for what it is. He gives this parable just after His comparisons of the Kingdom of Heaven to a seed. Seeds work similarly. Hidden, but then exposed as the beautiful growths they are.

Running with this image, we might say Jesus’ miracle was an after-the-fact action parable. 4,000 men had followed Him out into the wilderness to hear Him preach, to hear His doctrine. His doctrine expanded 12 men to 4,000. Those were real results. And it wasn’t airy nothingness or puffy fluff, which the hypocrisy of the Pharisees created. It was real.

And it continued after Jesus ascended. Those twelve men went out and with baptism taught new disciples to observe all things Jesus had instructed them on. That’s resulted in a Church of some two billion people today. Not bad leaven.

Though hidden at the time, hanging on a cross abandoned by most of His disciples, surrounded by just a few, outside the city gates, in the darkness, this hidden event has become manifest as the powerful, life-changing, world-changing event it was.

Jesus’ Word did it. His word of blessing or giving thanks. His doctrine expands the bread, as St. Paul writes, “For we, though many, are one bread and one body; for we all partake of that one bread.”

This is the day of the expanding man.