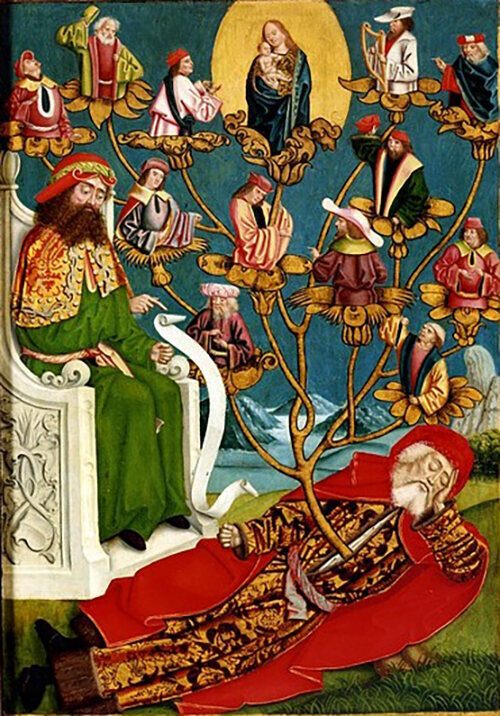 This week’s is a glorious Gospel. Matthew takes his stab at a theme we’ve seen quite a bit in Luke, that is, the idea that you can’t put new wine in old wineskins. We went through several Gospels in Luke where you begin in the Old Testament world (the wineskins), with its laws on clean and unclean, with its protocols for dealing with leprosy, and with its sacrificial system, but then Jesus lifts us into His world of fulfillment. He doesn’t destroy the Law, but fulfills it.

In Matthew this week, we get the heart of the Law, the Ten Commandments, or the moral Law. “Which is the great commandment in the law?” Most likely they weren’t expecting to get in a discussion about leprosy. It was a legitimate legal issue for lawyers. Which law is most important? This itself is an interesting abuse of theology, that parlor game of “Which doctrine is most important?” That leads to an attitude of, “What are the really essential teachings we need to worry about.” And that is profane – who are we to declare which of God’s words are truly important? The lawyer theologian is among the great pitfalls we should always avoid.

Jesus gives the summary we all have learned. The Law is about love. Yet, we should keep in mind, the love is not an abstraction of the Law, but a summary of the Law. That is, love doesn’t trump the Law, but permeates it. Very often people confuse this distinction. “We shouldn’t get caught up in the legalistic specifics of the Law; just as long as we love each other.” No! We love our neighbor, and the Law shows us what that looks like.

Worshiping the Lord and calling on His name; honoring the authorities He sets up; protecting the body, property, and reputation of others; keeping the marriage bed sacred; being content with what one has; this is what love looks like.

He asks a question of the Pharisees that presents a paradox. If the Messiah is David’s son, how does David call him “Lord” in Psalm 110 when he wrote by the Spirit, “The LORD said to my Lord”? Good question. Of course, we know the answer. Jesus is both David’s son and David’s Lord. That’s the mystery of the incarnation.

But Jesus was doing more than just turning the tables on the Pharisees and “one upping” them. He was, as we stated at the beginning, introducing a new world, a world of new wine, which could no longer fit the old wineskins.

Notice, Jesus taught that He is both God and man. And how did He sum up the entire Law? Love God and love man (our neighbor). He has taught us to see Him in our neighbors, as when He said, “Whatever you do to the least of these my brethren, you’ve done it to Me.” I happen to believe He’s talking mainly of the apostolic ministry here, but by derivation, He’s talking about the whole Church, and ultimately all the world, for He fills all things, and all things are created in Him.

That’s not where the Pharisees were expecting that discussion to go.