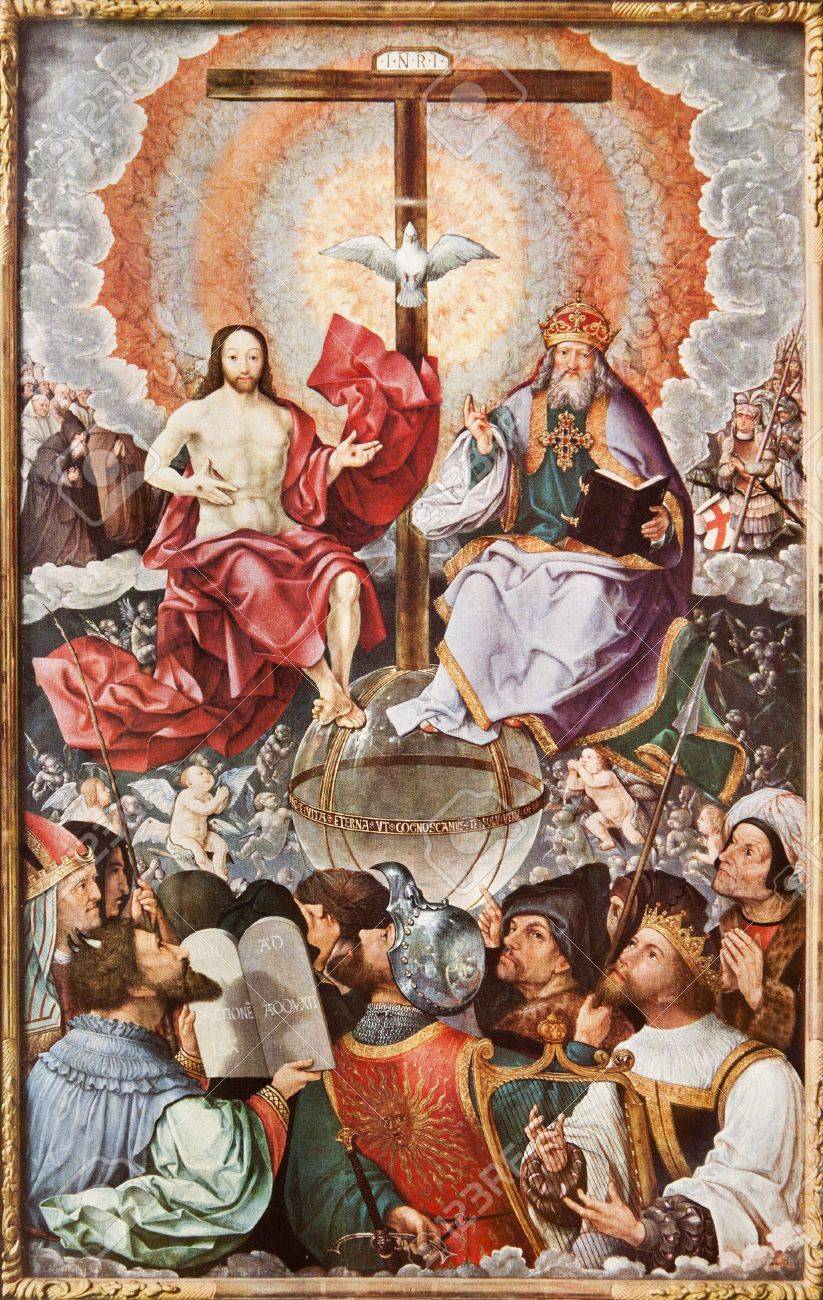 While he was still speaking, behold, a bright cloud overshadowed them; and suddenly a voice came out of the cloud, saying, “This is My beloved Son, in whom I am well pleased. Hear Him!”

Who exactly is the “Son of God”? It’s sort of an odd relationship within our doctrine of God. It makes sense on pagan terms, like Zeus siring a handful of sons by both humans and immortals – Hercules comes to mind. And the idea of one God makes sense on philosophical terms, the primary ground of all being who transcends all being itself, but the philosophical idea of God almost demands a strict monotheistic understanding. This was something Islam capitalized on.

But a single Father who has a single Son, both of whom are in essence one, along with a Holy Spirit, this introduces all sorts of mysteries. What’s going on here?

But then there’s the post-incarnate Son of God, Jesus Christ, the Word made flesh. This is the one who was born of Mary, suffered and died, who was transfigured, and who sits at the right hand of the Father.

At times the Scriptures speak this way, for instance when it describes Jesus as the Lamb slain from the foundation of the world. Huh? How did that happen? Well, it can happen because what happened “in time” with Christ is communicated “outside of time.” This, incidentally, is how our baptisms can be the “place” where we are elect from the foundation of the world, in Christ – that’s when our names were written in the Book of Life. This is also how Hebrews can say the Lord’s works were “finished” at the foundation of the world, yet the declaration of this finishing takes on flesh at the cross, when Christ said, “It is finished.” And clearly in our own lives, we still need finishing! Theologians like to describe this time mystery as the “now not yet” nature of God’s works.

If the incarnation of Christ is communicated to His eternity, was the Person who appeared to the Old Testament saints the incarnate Son of God, whose identity as Jesus Christ was a historical reality yet to be revealed in the fullness of time? When it says God made Adam in His own image, and we know the image of God is Christ, can we take this almost literally, that Adam was shaped in the human form because that’s the form Jesus had?

I like this interpretation because it makes Jesus’ life and death foundational to the entire cosmos. Because of our linear view of time we see Jesus as a chapter in the middle of a big book called “The History of the World.” But in God’s time, perhaps there’s more of a chiastic structure – structured like an X – and the middle part is foundational. So, Christ’s life and death are written into the foundational DNA of creation, and indeed, the creation itself works out the Father’s will in Christ Jesus.

This would make sense such passages as these from Hebrews: “[Jesus] learned obedience by the things which He suffered. And having been perfected, He became the author of eternal salvation to all who obey Him…”

Obedience here is the same word used for how the wind and waves obeyed Jesus. You might say it’s the proper posture the fundamental matter of creation must take before God. If one would be worked on by the Lord, he must passively accept being worked on. That’s obedience. Jesus is Lord and God, and He’s also the one who “fills all things in heaven and on earth,” suggesting He’s the embodied creation itself!

(This recalls the suggestion a few weeks ago, that Christ’s baptism itself was like the Lord calling for a new creation out of the old – the Lord is always calling new creations out of the waters!)

Part of the Christian life, then, and obviously, is to passively accept, or surrender to, God’s work on us in our lives. Whatever suffering befalls us is His “authoring” of our salvation. It’s His work of creating us.

Jesus is the Son and Word of the Father made flesh. Words create worlds, which means the perfected world is the Body of Christ, who again, fills all things in heaven and on earth. When the Father presented His Son to Peter, James, and John and declared Him His Son, the one to be listened to, He was inviting them into a new world. They were witnessing what this new world meant – brightness, glory, beauty!

To listen to Jesus means to be obedient to Him, which means to receive His work on our lives, which means, yes, suffering. Just as it meant for Him. It is how He authors our salvation. That word, “author,” from Hebrews is interesting. Authors create worlds with words. Words cut and hew as they build. So also Jesus’ words in our lives.

Yet, lest our three witnesses lose hope, we also have that witness of what awaits, the glory of the transfiguration. Armed with that vision, all suffering becomes bearable. It’s as St. Paul writes, hoping how he “may know Him and the power of His resurrection, and the fellowship of His sufferings, being conformed to His death,” all so that He might “attain to the resurrection from the dead.”

What obedience is learned in suffering? What did Jesus learn? What did the Second Person of the Trinity gain by experiencing suffering in human flesh? Why in the Gospel of Luke was Jesus talking about His death with Elijah and Moses? These are mysteries which must be left for another day, but whatever the reason, suffering is pretty foundational to what it means to be human, and live in fellowship with our Creator. Jesus Himself, the Creator’s own Son and focus of love, embodying the creation, had to suffer, and this is foundational to everything. Jesus couldn’t say “It is finished” until He underwent it. Why?