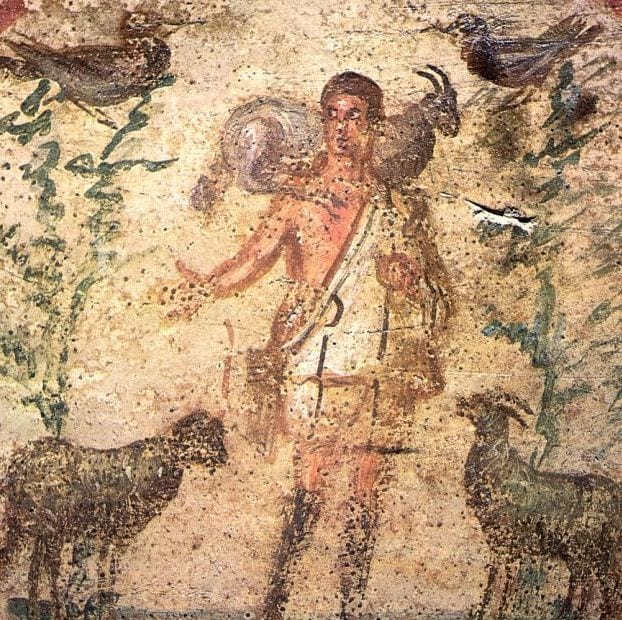 There’s a lot going on in this little sentence. Perhaps we could stop at face value and embrace the meaning every child would understand: Jesus died for me. But this is the glory of St. John’s Gospel. You can start with the simple – and John’s Gospel is so very simple – dive into the depths of its mysteries, and end up where you started, blessed every step of the way.

So let’s dive into the depths for a bit.

Of course, in John, any statement of “I am” is more than meets the eye, referencing as it does God’s divine name: “I am that I am.” So when we see “I am,” we should hear “God,” and not just any God, but the God of Israel, the God that appeared to Israel, the God that revealed Himself repeatedly in the Old Testament as Israel’s shepherd.

The fact that Jesus applies the “I am” to Himself substantiates the entire claim of the Gospel, that Jesus is the “Word made flesh and dwelling among us.”

So right off the bat, Jesus is saying something about God, as revealed in Himself. God is good, a good shepherd. Let’s look at how God was a shepherd for Israel in the Old Testament. What freight is loaded onto this term from the Scriptures? A good summary of the many verses is this one from Ezekiel: “I will establish one shepherd over them, and he shall feed them – My servant David. He shall feed them and be their shepherd.”

The image of God shepherding Israel is founded in Israel’s wandering in the wilderness, where the Lord guided them, protected them, and most importantly, fed them with their daily bread and manna. (Again we see here – given the “daily bread” petition of the Lord’s Prayer – how essential the image of Jesus as our shepherd is, why it preceded even the cross historically.)

Jesus too feeds us with manna, as He showed in the feeding of the 5,000 in the beginning of John 6. But as He strenuously pointed out for the remainder of John 6, the true bread He gives us to eat is His flesh and blood, which gives us eternal life. Jesus thus feeds us with the flesh and blood in which He (drum roll)…gives His life for the sheep.  (Recall the pastoral context of the feeding of the 5,000.)

So let’s do some “find and replace.” I am the good shepherd. The good shepherd gives His life for the sheep. “God is the one who feeds us with the flesh and blood He gave in His death, which gives us life.”

Ah, but what of the “good”? Now we get back to our problem of evil, and the introit for this past Sunday, that the earth is full of the goodness of the Lord.

How about this: “In Christ, the I Am, God is good, and this goodness is demonstrated in how He shepherds us, by giving His body and blood for us to eat and drink, in which we have eternal life.”

Now let’s put it simply: “In Holy Communion, we see how the earth is full of the goodness of the Lord.” Yes! Of course, this is why Holy Communion is also a “thanksgiving,” a Eucharist. Because through it we receive all the creation as good and something to give thanks for, first in the liturgy, then throughout our days. “Oh give thanks unto the Lord, for He is good, and His mercy endures forever.” When do we pray this prayer? After communion. And this founds St. Paul’s comment that we should give thanks at all times for everything in the name of Christ.

Yet, we’re still a bit in theoretical territory. Tell someone who just lost his child that all will make sense if he just goes to communion, that properly understood, they can give thanks for what happened. How can this even be?

Here’s another way to look at it. What’s the alternative? If not faith in the good God who gave eternal life in His body and blood (and in which our hearts are lifted to the place where the child lives and where eternal joys are to be found), then what?

I recently read an article talking about how the loss of active faith (meaning, going to church) has corresponded to the rise in suicide and depression. The article mentioned that compared to the general population, Roman Catholic women who attended mass once a week committed suicide at half the rate of the general population. And of the 7,000 women surveyed over years who attended mass more than weekly? Not a one of them committed suicide.

Is it possible to have your very vision of the cosmos re-ordered in such a way, that you see God’s goodness even where others see death, hopelessness, and darkness? Is it possible that Holy Communion can have this effect, to reboot the soul in such a manner?

Is it possible to walk in the valley of the shadow of death and fear no evil, because God is present there, preparing a table for us in the presence of our enemies?

Again, without faith in a positive answer, what’s the alternative? Thankfully, our faith is grounded in this season of resurrection. Jesus is risen. Many witnesses saw it. He is the I Am. He is the Good Shepherd. And He most certainly prepares that table.