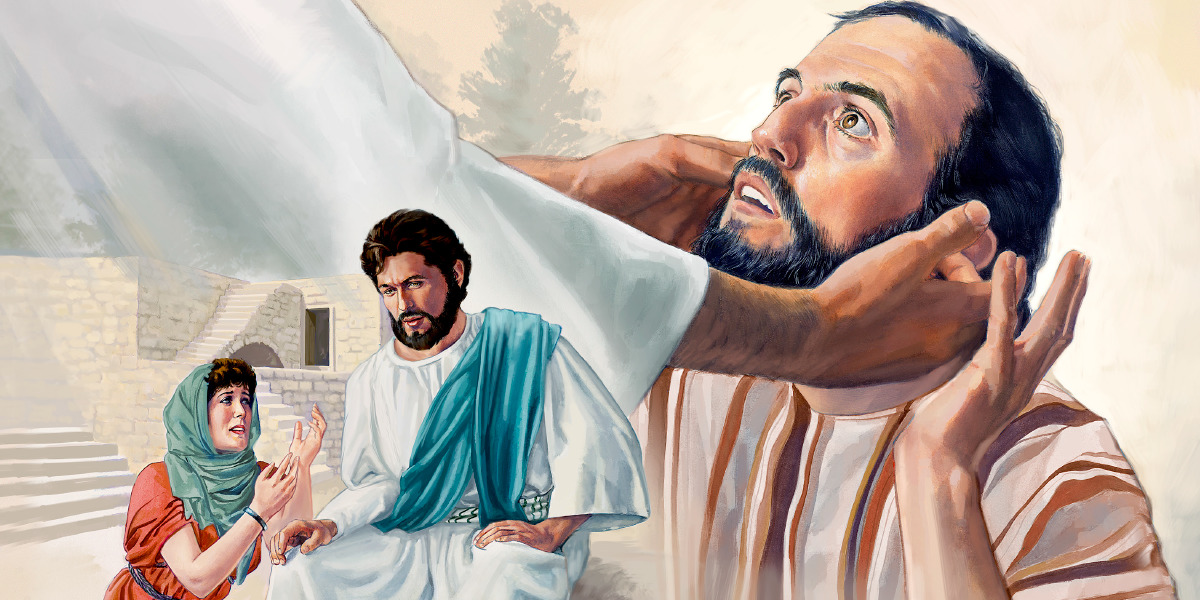 And He took him aside from the multitude, and put His fingers in his ears, and He spat and touched his tongue.

Here is a nice instance where the Gospel for this week parallels a theme from the epistle. The epistle from Second Corinthians speaks of two ministries. First there was the “ministry of death, written and engraved on stones,” and then there was the “ministry of the Spirit.” What’s the difference between the two? Simply put, as St. Paul does, “the letter kills, but the Spirit gives life.”

That covenant came with terror, from “a mountain that may [not] be touched and that burned with fire, and to blackness and darkness and tempest, and the sound of a trumpet and the voice of words, so that those who heard it begged that the word should not be spoken to them anymore.” It was truly a ministry of death.”

But through the prophet Jeremiah the Lord promised a new covenant. “Behold, the days are coming, says the LORD, when I will make a new covenant with the house of Israel and with the house of Judah – not according to the covenant that I made with their fathers in the day that I took them by the hand to lead them out of the land of Egypt, My covenant which they broke, though I was a husband to them, says the LORD. But this is the covenant that I will make with the house of Israel after those days, says the LORD: I will put My law in their minds, and write it on their hearts; and I will be their God, and they shall be My people. No more shall every man teach his neighbor, and every man his brother, saying, ‘Know the LORD,’ for they all shall know Me, from the least of them to the greatest of them, says the LORD. For I will forgive their iniquity, and their sin I will remember no more.”

With the new covenant, the Lord will do writing again. He’ll use His finger again. But this time He’s not writing on stone, but in minds and hearts. This writing will be through the forgiveness of sins.

That last verse, Jesus teaches in the context of casting out demons. He gets in that controversy with the Pharisees about whether He casts them out by Beelzebub or not. Notice how Matthew and Luke differ in their account of Jesus’ words.

From Matthew: “But if I cast out demons by the Spirit of God, surely the kingdom of God has come upon you.”

From Luke: “But if I cast out demons with the finger of God, surely the kingdom of God has come upon you.”

What changed? We don’t go the semi-Gnostic route and claim there’s an entirely new mode of God’s being. To wit: “In the Old Testament God was mean and judgmental, but now He’s kind and tolerant.” Wrong answer.

What then changed? Simple. The finger took flesh and dwelt among us. In the Old Testament, the naked presence of that finger, if we can stretch the symbolism a bit, caused rock to fly from its presence. It was a destructive force. Where it went, rock went elsewhere, and engraved stone was left behind. Pharaoh recognized the ultimate destructiveness of that naked finger, as did King Belshazzar when that naked finger was joined by the rest of the hand, writing on the wall.

The ministry of the Spirit is a different ministry. It tabernacles the authority and power of God in flesh and blood. Veiled in flesh, but yet completely present in each particle of that flesh, God is present among us in Christ Jesus, no longer to bring death, but to bring life.

Jesus sticks His finger in the deaf man’s ears. He’s writing something new, not with words of the Law but with an action of grace and mercy. He’s driving away the demons that held those ears and mouth under the curse, for where God is present, the demons cannot be. He’s forgiving the man’s sin. It’s the ministry of the Spirit.

Something similar is taught when Jesus writes on the ground in the episode when the religious leaders brought to Him a woman caught in adultery and asked what should be done. They informed Him what the engraved text said, “Such should be stoned.” But what does Jesus say? The finger of God in the past stated one thing; what does the incarnate finger of God say? Then Jesus bends down and writes in the dirt. We’re not given what He wrote, because just as the Jeremiah prophecy said, the new covenant is not something of the letter. It’s something of the spirit, written on hearts and minds, and conveyed through forgiveness. Which is exactly what Jesus gives the woman, absolution.

The finger of God became flesh and dwelt among us; it is the Spirit of God at work giving the forgiveness of sins.

Here’s another instance where popular piety falls short of what the Gospel teaches. Popular piety speaks of spirituality in opposition to the body. Spirituality is thought to be something transcendent, something negating, something defined by what it is not. In fact that’s the Old Testament understanding. God was hidden, manifest in His negating effects like the engraved gap left in stone after He was through.

Jesus introduces something wonderful and new. Spirituality is mundane, earthly, near, and fleshy. It is fingers stuck in our ears, to open them and fill our hearts and minds with knowledge of the forgiveness of sins, in fulfillment of the Jeremiah prophecy, along with that ultimate fulfillment, where the New Covenant in His blood is given out for the forgiveness of sins.